In hydraulics, a pressure reducing valve serves the same purpose as a "pressure regulator" valve in a compressed air system. It can be described as a 2-way, normally open valve which is piloted from its own outlet. It is one of a variety of pressure control valves available for hydraulic circuits. It is always used in a branch circuit, never in the full pump flow line. It will reduce the pressure in one branch while allowing other branches to operate at full system pressure. A knob or screw allows adjustment of the outlet pressure over the working range of the valve. It will accept a flow of high pressure oil on its inlet and deliver the same flow from its outlet at a constant reduced pressure, as long as the inlet pressure is higher than the value set on the adjustment knob.

A description of operation of the valve itself will be found in "Industrial Fluid Power - Volume 2" published by Womack Machine Supply Co.

Low Pressure Branch Circuit
Figure 1. In this 2-branch circuit, the working cylinder operates at full system pressure, but the clamp cylinder must operate at reduced pressure if full pressure would distort or crush the part being clamped. 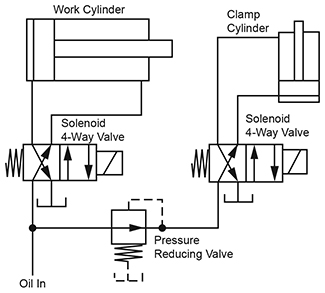 Pressure reducing valves should never be used on all branches of a system. Pressure to the branch requiring the highest pressure should be set on the system relief valve.

Figure 2. A highly reactive load may require the addition
of a pressure relief valve on the reducing valve outlet.

If needed, a direct-acting relief valve should be used and should be adjusted to a cracking pressure 300 to 500 PSI higher than the reducing valve outlet to prevent discharge of oil to tank during normal operation of the cylinder.

Some manufacturers supply a 3-port reducing valve which includes a built-in relief valve on the outlet port.

External Drain
All reducing valves have an external drain port, and on all applications, without exception, a drain line must be run directly to tank. A reducing valve drain can usually be combined with the drains from other reducing valves or sequence valves but should never be teed into a main tank return line. Pressure surges which may appear at times in a tank return line would cause similar surges to appear in the outlet of the reducing valve.

While main tank return lines should always discharge below the oil level in the tank, drain lines are often discharged on top of the oil to prevent siphoning oil out of the reservoir if a drain line should be disconnected at the valve.

Remote Control of Reducing Valves
If the reducing valve is the pilot-operated type (and practically all of them are), it may be remotely adjusted for outlet pressure level from a remote control position up to 10 feet away, sometimes from a greater distance. 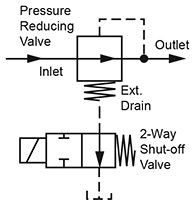 Figure 4. A small (1/4˝) direct-acting relief valve installed in series with the external drain will add its pressure to that which has been set on the knob of the main valve. If this can be varied from that which is set on the main knob, up to the full pressure appearing on the inlet, but can never be adjusted to a pressure less than the setting of the main knob. 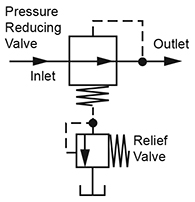 Figure 4. The relief valve allows a remote adjustment of
the outlet pressure from reduced setting up to full inlet PSI.

Multiple Pressure Remote Control
Figure 5. Any number of outlet pressure levels can be selected from a remote point using 2-way valves, manual or solenoid, and 1/4˝ direct-acting relief valves. Figure 4 is set up for selection of minimum reduced pressure, two intermediate levels, and full inlet pressure on the outlet.

The lowest desired level must be set on the knob of the reducing valve. At the remote point any number of higher outlet pressure levels can be selected. The chart below shows which solenoids are to be energized for each pressure level. 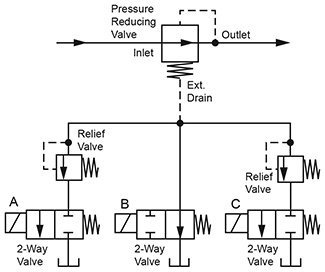 Pressure Compensator for Flow Control Valve
Figure 6. A pressure reducing valve can be used to convert any type of 2-way valve into a pressure compensated flow control. It can be added to a needle, ball, gate, globe valve, etc. The reducing valve is placed upstream of the 2-way valve with its external drain connected downstream of the 2-way valve. It regulates the upstream pressure to keep it always about 75 PSI higher than the downstream pressure. Therefore, since the pressure difference across the 2-way valve remains constant, flow through it also remains constant regardless of fluctuations in load resistance.

Power Loss Through a Reducing Valve
There is a power loss through pressure reducing valves and a resultant heating of the oil in the tank. However, this loss is present only during time periods when flow is passing through the valve. On holding applications, power loss is limited to internal pilot oil flow which is usually about 1 GPM or less.

Power loss, in HP, is calculated with the standard fluid power HP formula:

PSId is the pressure difference, in PSI, between the valve inlet and outlet ports.