Cylinder Drift Problems and Their Solution

There are certain conditions in a hydraulic cylinder circuit which may cause a cylinder to slowly drift (creep) when its 4-way control valve is in its center neutral position. The cause (in the fluid circuit) for cylinder drift is the unbalance between areas on opposite sides of the piston. Oil which leaks across the spool of the 4-way valve, under pressure, acts on unequal areas of the piston to develop a force unbalance which may cause unwanted piston movement unless there happens to be sufficient dead load or reactionary load against the piston rod to restrain piston drift. Oil leaking internally across the piston seals can also cause drift as discussed later.

Cylinders which have an oversize or 2:1 ratio piston rod have a greater tendency to drift than those cylinders with smallest (standard) diameter rod. Drifting force is equal to system pressure multiplied times rod area. Therefore, on circuits where drifting may be a problem, the cylinder should have the smallest diameter rod which has sufficient column strength.

In this issue we will consider those circuits which may have a tendency to drift, and will attempt to offer solutions.

Reactionary Load
Figure 1. If the cylinder is expected to support a heavy load or reactionary force while stopped, internal spool leakage of the 4-way valve will permit the cylinder to drift. Leakage paths inside the valve are shown in dotted lines.

Figure 1. Drift due to valve spool leakage and a reactionary load.

Figure 2. Cylinder drift from valve spool leakage can usually be minimized to an acceptable level by placing a pilot-operated check valve in the cylinder line to prevent reverse flow caused by load reaction. This check valve must be piloted from the opposite cylinder line, and this line must be vented to tank through the spool of the 4-way valve in neutral position to prevent pressure build-up on the pilot (from valve spool leakage) which would cause the check valve to open and allow the cylinder to drift.

Note that neither a pilot-operated check valve nor any other external means will prevent cylinder drift if the drift is caused by leaking piston seals.

If the reactionary load (while the cylinder is stopped) is pulling instead of pushing on the piston rod, the pilot-operated check should be located in the rod end line, and the opposite cylinder port on the 4-way valve should be vented to tank in neutral. Since pressure can intensify in the rod end of the cylinder when the rod port is blocked (as by a pilot-operated check valve), the application must be evaluated to be sure intensification will not cause damage. 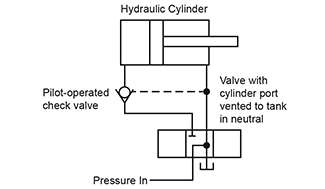 Tandem Center System
Figure 3. If two or more cylinder branch circuits are operated from one pump, the upstream cylinder (Cylinder 1 in Figure 3) may drift when the downstream cylinder is operating at high pressure.

Leakage across Valve 1 spool, entering the blind end will cause pressure intensification in the rod end of the cylinder. This intensified pressure, being higher than pump pressure, may leak across the valve spool into the pump line, causing forward drift of the cylinder, unless the reaction or gravity load is sufficient to prevent it. To calculate drifting force, multiply rod area times inlet pressure to Valve 1. 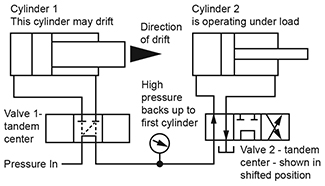 Closed Center System
Figure 4. A closed center system is one which includes two or more branch cylinder circuits operating in parallel from one pump. The pressure inlet port on all directional valves, whether individual valves or one bank valve is used, is closed to oil flow when the valve spool is in center neutral position. Pump pressure builds up to relief valve or compensator level and is maintained during the time all valve spools are centered.

To avoid power waste and heat build-up in the oil, a variable displacement pump with a pressure compensator is usually employed in a closed center system.· When all valve spools are centered and system pressure holds at its maximum level, the leakage across the 4-way valve spools is at a maximum and frequently will cause one or more of the cylinders to drift, especially those with large diameter rods and those with little reactionary load against them.

In Figure 4 the possible leakage paths across the spool of Valve 1 are shown in dotted lines. Leakage into the blind end of Cylinder 1 will cause pressure intensification in the rod end. The intensified pressure, being higher than pump pressure, may leak across the valve spool and into the pressure line, thus causing the cylinder to drift forward. However, if there is a dead load or reactionary load against the piston rod greater than the drifting force of rod square inch area times pump pressure, the cylinder cannot drift.

A suggested solution for closed center systems is shown for Cylinder 2 in Figure 4. A lock valve may be placed in the lines to the cylinder. A lock valve is a double section pilot-operated check valve. In addition to the lock valve, the spool in Valve 2 must be a float center type, venting both cylinder ports to tank when the spool is centered. The lock valve will prevent cylinder drift in either direction. The vented ports on the 4-way valve will prevent spool leakage from building up on the pilots of the check valve and holding them open. Spool leakage will simply go to tank. 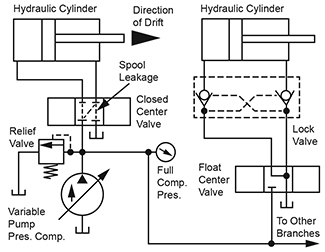 Leakage in the Piston Seals
If the piston seals are not leaktight, this may also cause the cylinder to drift either under the influence of valve spool leakage or reactionary load against the piston rod. This type of drift can sometimes be minimized under certain conditions of operation:

Figure 5. If the reactionary or gravity load is tending to pull the rod out as in this figure, there is no way to arrange the external circuit to guarantee there will be no drift in either a closed or open center system. Apparently the only remedy is to select a cylinder with leaktight piston seals. Even this may not eliminate drift due to leakage across the valve spool. If drift develops after a period of usage, the piston seals should be replaced. 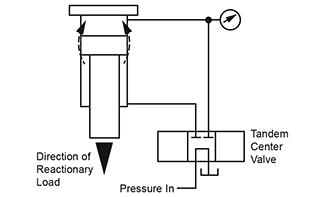 Figure 6. However, if the gravity or reactionary load is pushing against the piston rod, there is a chance of minimizing drift by using a 4-way valve with blocked cylinder ports in neutral If leakage across the valve spool could be eliminated, it would be impossible for the cylinder to drift inward regardless of how great the piston seal leakage might be. For each 1 cubic inch of leakage from the blind end, for example, there is less than l cubic inch of volume on the rod end for it to go into.

To further minimize drift due to internal leakage through the piston seals, the 4-way valve itself should be a high quality model rated for low internal leakage. Note that a pilot-operated check valve or lock valve would not help in piston seal problems. Since there is no pressure intensification in the rod end of the cylinder of Figure 6, pilot pressure obtained from the blind end of the cylinder would not allow a check or lock valve to close, holding it open for free flow in both directions.

Piston seal leakage can be a very serious problem in closed center systems, and sometimes it may be virtually impossible to eliminate cylinder drift. Cylinders and valves for these systems should have a very low leakage rating. 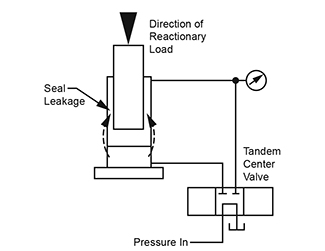