The Problem
Although the accuracy of oil metering and the speed regulation may be quite satisfactory at moderate to high feed rates, they become progressively worse as cylinder speed is reduced by metering the oil flow through a flow control valve where, for example, we may be trying to meter oil flows of 50 cubic inches per minute (1/4 GPM) or less. The result may be erratic movement of the cylinder (chatter), damage to tools or workpieces, or poor regulation of cylinder speed as the load changes.

1. The Cylinder Piston Seals
Piston seals on the cylinder must be leaktight. Metal piston ring seals should not be used. Best results are obtained with synthetic rubber cup seals; they are preferred over O-ring seals. Piston seal leakage is of little importance at moderate to high feed rates, but at low feed rates the seal leakage becomes a greater percentage of total flow and greatly affects feed accuracy. Soft piston seals, worn from long service life may start leaking and cause chatter to develop. They should be replaced often.

2. The Flow Control Valve
Although a pressure compensated type flow control valve may work quite well at moderate to high feed rates, it becomes inaccurate at low rates. The oil which slips internally past the compensating spool becomes a greater percentage of total flow and destroys metering accuracy. On extremely low feed rates, a needle-type non-compensated flow control valve may be the only type which will work satisfactorily.

If a pressure compensated type of flow control must be used, select a high quality brand and a model rated for very low flows. Some valves will not meter accurately at flows less than 1/2 GPM, and these definitely are not suitable.

3. The Cylinder Bore Diameter
Figure 1. Choose a cylinder bore larger than would be necessary simply to produce the required force. The larger oil flow to the larger bore (to produce the same linear rate of travel) is easier to meter accurately at very low feed rates.

System design should be based around the concept of using a lower PSI pressure and a higher GPM flow rate than might be used on a cylinder with a faster feed rate. This has two advantages: 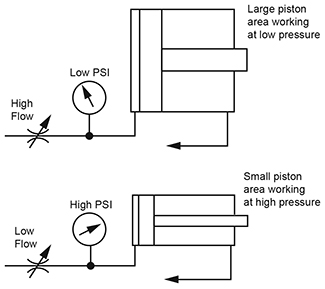 Figure 1. Both of these cylinders produce the same force to the load but the
large bore cylinders can be controlled more accurately at very low piston speed.

4. The Flow Control Method
The by-pass or bleed-off speed control system (Figure 2), should never be employed for low feed rates. This would leave the system sensitive to pump and 4-way valve leakage as well as to cylinder and flow control valve leakage, and inaccuracies would be compounded. The flow control valve should always be placed to meter flow into or out of the cylinder; that is, meter-in or meter-out type of control.

Figure 2. Although by-pass speed control generates less heat, when used for
very low feed rates, the speed regulation of the cylinder may be unacceptable.

5. Meter-In vs Meter-Out Speed Control
Either type may be employed on most systems with almost the same results, with these possible exceptions:

6. Placement of the Flow Control Valve
Figure 4. The flow control should be placed in one of the cylinder lines, never on the upstream side of the 4-way valve. This would add 4-way valve spool leakage to the other leakages, reducing metering accuracy. There should be no possible leak paths (valves, etc) between flow control and cylinder.

The flow control valve should be installed as near the cylinder port as practical, and the connecting line between the two should be kept as short as possible. Oil compression in this line would make the system less "rigid" and might cause chatter. The length of the connecting line affects "rigidity" but the diameter does not. It may be of any diameter but should be as short as possible.

Figure 4. Flow control valves should be located
in a cylinder line, never upstream of a 4-way valve.

8. System Relief Valve
Set the pump relief valve as low as practical. A fixed displacement pump operates continuously at relief valve pressure with meter-in or meter-out speed control. Setting the relief too high causes a higher-than-necessary pressure difference between inlet and outlet ports of the flow control valve, causing a greater rate of leakage. It also tends to heat the oil; hot oil leaks at a faster rate than cool oil.
One way to adjust the relief valve is to gauge the actual pressure caused by the load with the cylinder in motion. Then, back down the relief valve as far as possible without causing a decrease in the load pressure reading.

9. Load Sensing Control on the Pump
Figure 5. Some manufacturers offer a variable displacement pump equipped with a compensator which responds not only to maximum pressure build-up in the pump line, but responds also to rate of flow through the system. The pump displacement is automatically reduced to the exact flow which will pass through the orifice of a needle-type flow control valve at a specified pressure drop, 100 to 150 PSI. The pump control becomes a pressure compensating device for the needle valve. The needle valve than has the combined advantages of having no internal leakage past the control orifice to affect accuracy, plus the addition of pressure compensation, which keeps cylinder speed constant as the load resistance may change.