Effects of Oversizing or Undersizing an Electric Motor for a Job

Womack Data Sheet 49: Effects of Oversizing or Undersizing an Electric Motor for a Job

Motor information given here pertains only to 3-phase squirrel cage induction motors, Design B, the type used most often to drive hydraulic pumps.

Our suggestions for limits on overloading electric motors were given in Data Sheet 2. Information in this issue considers other factors which may be pertinent to motor loading.

Optimum results are obtained if motor HP rating very closely matches load HP requirement, being neither too far oversized nor undersized. Some effects of mismatch are:

Oversized Motor. Using a 20 HP motor on a system which requires only 10 HP, for example, will give good results as far as running the system is concerned, but will consume more electric power than a 10 HP motor and will cause the power factor of the electric system in the plant to become poorer, especially during periods when the motor is idling. Idling current of a 20 HP motor is about half the full load current of a 10 HP motor, so a great deal of power is wasted during periods in the cycle when the motor is idling.

Undersized Motor. Using a 20 HP motor on a system which requires 25 HP for peaks is quite possible, but during overload periods the line current of such a motor may be about twice the line current of a 25 HP motor. Again, there may be a high waste of power during peak times in the cycle. But the smaller motor may save considerable power during periods it is idling or working at less than full rating.

In view of the above factors, on a hydraulic system where peak consumption occurs less than 10% of total running time, it may be good design to use an undersize motor provided it will not be overloaded by more than 25%.

Power companies charge for power by the number of kilowatt-hours used. But in some plants, the rate at which each kilowatt-hour is charged is based on the maximum current flow occurring during the metering period. A poor power factor within the plant increases the line current (and the rate) without consumption of more power. Therefore, either oversizing or undersizing of electric motors can increase the cost of electric power to the plant.

Measuring HP Load on an Electric Motor
The line current can be measured to see whether a motor is working at less or at more than its full load rating. Measurements are made with a loop ammeter without disconnecting any wires. The ammeter loop is clipped around any one of the 3-phase feeder wires any place in the circuit, in the motor junction box or in the motor starter or fuse box. The current reading is compared to nameplate current rating. Since line current is not exactly proportional to HP, the chart in the opposite column may be used to estimate how nearly the motor is operating at its full load rating.

Values in the body of the chart are the amps which the motor will draw at various percentages of full loading. F.L. (full load) amps will vary slightly between brands. Amps are shown at 230 volts, and for 440 volt operation will be about half the values shown.

After measuring motor current, interpolate between values in the chart to estimate per cent of full loading. 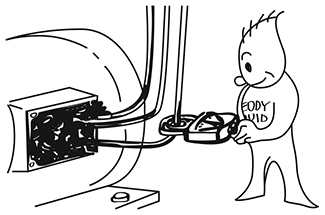 Example: Suppose the measured current of a 40 HP, 1800 RPM motor was 55 amps. Interpolation between the 63.1 amps shown for 60% loading and the 47.4 amps shown for 40% loading will indicate that the motor is operating at about 50% of its full load capability. This same machine could be run with less current and with a better power factor with a 20 HP motor. And, if the 55 amps was peak current which occurred no more than 10% of total running time, a 15 HP motor would probably do the job.