Finding the Cause of Solenoid Coil Burn-Out

Womack Data Sheet 30: Finding the Cause of Solenoid Coil Burn-Out

Perhaps occasionally a coil on a solenoid valve may burn out because of a defect in its manufacture. But usually the cause can be traced to some abnormal condition either in operating conditions of the machine on which the valve is installed, or to unusual environmental conditions. This becomes evident if the burn-out should occur more than once at the same coil location.

Checklist for AC Solenoid Valves
Burn-out is more common on valves with AC coils than on those with DC coils because of the high inrush current. Until the armature on the solenoid can pull in and close the air gap in the magnetic loop, the current is often 5 times as high as the steady state, or holding, current after the armature is seated. Inrush is approximately the same as holding current on a DC solenoid valve.

1. Coil Does Not Match Operating Voltage
Improper match between the electrical source and the coil rating is sometimes a cause for coil burn-out:

The low voltage test should be made by measuring the voltage directly on the coil wires while the solenoid is energized and with its armature blocked open so it is drawing inrush current. Energize the solenoid just long enough to take a voltage reading. Also take a no-load reading with the solenoid disconnected from the feed wires. A difference of more than 5% between these two readings indicates excessive resistance in the wiring circuit, or insufficient volt-ampere capacity in the control transformer, if one is used. 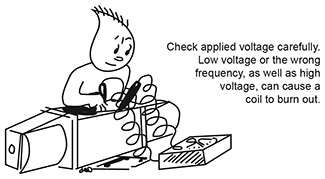 2. Overlap in Energization
On some double solenoid valves, if both solenoids are energized at the same time and held in this state for a short time, the last coil to be energized will burn out from the excessive inrush current, which is about 5 times holding current.

A solenoid can burn out if both solenoids are energized
at the same time on a double solenoid valve constructed
like this one in which solenoids are mechanically
coupled to opposite ends of a common spool.

The burn-out condition described above will occur only on double solenoid valves where the two solenoids are yoked to opposite ends of a common spool as shown in the figure. If each solenoid can immediately close its magnetic gap, neither will burn out if simultaneously energized.

Careful attention should be given to electrical circuit design to make certain that the operator, through accident, cannot energize both solenoids simultaneously.

Even with correct circuit design and interlock circuits a relay with sticking contacts or slow release could be responsible for a momentary overlap of energization on each cycle and eventual coil burn-out. A simple device for detecting this condition is described in Design Data Sheet 18.

3. Too Rapid Cycling
Since the inrush current may be up to 5 times the holding current, a standard AC coil on an air-gap solenoid may overheat and burn out if required to cycle too frequently. The extra heat generated during inrush periods cannot escape fast enough. The gradual build-up of heat inside the coil winding may, in time, damage the coil insulation.

High cycling applications can be roughly defined as those requiring the solenoid to be energized more than 5 to 10 times per minute. On those applications, oil immersed solenoid structures should be used. Conduction of heat through the oil surrounding the winding allows the coil to operate at a lower temperature.

In plants where instrumentation is available, a thermocouple can be placed on the surface of the winding in two identical valves of the type to be used. One valve can be continuously cycled for several hours at the proposed cycle rate while the other is continuously energized. A difference of more than a few degrees in surface temperature of the two coils indicates a need for oil immersed solenoids.

4. High Electrical Transients
If the current for the solenoid valves is taken directly from a power line which is supplying large inductive devices such as electric motors, the switching of these motors may cause high voltage transients which may break down the insulation of solenoid valve coils. A 'thyrector" should be installed across each coil to "short circuit" these transients. Thyrectors are available at industrial electrical supply houses.

5. Dirt in Oil or in Atmosphere
A small solid particle lodging under the solenoid armature may keep it from fully seating against the core, causing coil current to remain higher than normal during the holding period. Be sure that solenoid dust covers remain tightly in place to protect against dust deposited from the air.

Small dirt particles in the oil may lodge on the surface of the spool, glued there by "varnish" circulating in the oil, or the varnish itself may cause excessive spool drag and excessive coil current. "Varnish" forms in systems where the oil is allowed to run too hot. Heat accelerates unwanted chemical reactions. Reduce oil temperature with a heat exchanger.

6. Environmental Conditions
Abnormally high or abnormally low ambient temperatures to which a solenoid is exposed for an extended time may cause a solenoid to burn out.

7. Dead End Service
Fluid circulating through a solenoid valve helps to carry away electrical heat. Some valves depend on fluid flow to keep excessive heat from accumulating, and if used on dead end service, where the solenoid remains energized for long periods without fluid flow, the coil may burn out from this effect, possibly in combination with other problems.

8. Atmospheric Moisture
High humidity, coupled with frequently changing ambient temperature, may form corrosion on metal parts of the solenoid structure, causing the armature to drag or the spool to stick. Humidity also tends to deteriorate standard solenoid coils, causing shorts in the winding.

9. Excessive Flow Through Valve
Pressure drop through the spool of a direct-acting solenoid valve caused by the flow of fluid, creates a force unbalance tending to cause the spool to move in an axial direction. This phenomenon is described in Design Data Sheet 18.

In circuit design, be very careful not to overload such a valve above manufacturers flow rating. It should be de-rated when used with fluids of high viscosity, or fluids having a high specific gravity (fire resistant fluids, etc).

Checklist for DC Solenoid Valves
AC solenoid valves are far more common for in-plant industrial applications, but DC solenoids may in some cases offer a specific advantage. AC current may be run through a full-wave rectifier to obtain a DC supply. A filter capacitor may have to be added to eliminate chatter or hum.

A capacitor wired across the switch contacts on AC or DC solenoids will help absorb the released energy. The best value of capacitance can be determined by trial, either by observing the intensity of the arc, or by measuring the voltage spike with an oscilloscope as various capacitors are tried.