The HP flowing in the piping of a fluid power system is proportional to both pressure and rate of flow. Power can only be transmitted if the fluid is moving under pressure.

The HP level determines not only how much load can be moved, but also how fast it can be moved. Therefore, time is always involved with HP ratings.

We have "become accustomed to using certain formula involving PSI and GPM when figuring the power level of a fluid system. These formula are:

Both formula give the same answer. Of course these formula are only good in the U.S. system of units. In Data Sheet No. 21 the equivalent formula were given for SI (International Standards) units.

Many people have asked where these formula come from; how they were derived; where the 0.0005833 and 1,714 come from? There are several ways of finding the fluid power equivalent of mechanical HP which by definition is: 1 HP = 33,000 ft-lbs per minute. We believe the method described here will be more readily understood by people who work with fluid power and who wish to avoid a complicated mathematical derivation.

How to Find the Fluid Power Equivalent of Mechanical Horsepower

In this method we will use an imaginary hydraulic cylinder which has a piston area of 1 square inch. Friction in the cylinder is not pertinent to this demonstration, but will be taken into account later as explained at the foot of this page.

We will supply this frictionless cylinder with an oil flow of 1 GPM (231 cubic inches per minute) at a pressure of 1 PSI. Since the piston has 1 square inch area, the cylinder will produce a force of 1 pound.

If we allow this cylinder to operate in the forward direction for a time of 1 minute, its piston will travel a distance of 231 inches (or 19.25 feet). Next, we compute the mechanical HP produced by the cylinder at a flow of 1 GPM and a pressure of 1 PSI, based on 1 mechanical HP of 33,000 ft-lbs per minute.

The figure 0.0005833 is, therefore, a multiplier times the PSI and GPM to find the power level in the fluid stream. A more familiar factor is to take the reciprocal of 0.0005833 and use it as a divider:

The fluid HP formula developed a hove will give an accurate measure of the power flowing through the fluid. However, the mechanical output of a cylinder or hydraulic motor operating from this pressurized flow of oil will be less by the amount of losses - mechanical and fluid - in the cylinder or motor; in other words, by its efficiency.

7 WAYS TO INCREASE SPEED OF AN AIR CYLINDER

On existing air systems if necessary to increase travel speed of the cylinder, one or several of these modifications may be made. Usually, a speed-up in only one direction is wanted - in the direction of the heavier load.

1. In-Line Speed Controls. Figure 1. Flow control valves installed between valve and cylinder always restrict the air flow and reduce cylinder speed to some degree even when wide open. Internal passages in both needle and check valves are usually much smaller than their connection ports. Cylinder speed in both directions will be increased with them entirely. removed. In Figure 1, the flow control has been removed from Point A and retained in the rod port to reduce retraction speed. It will still slightly reduce forward speed because of the small orifice in the "free return" check valve. 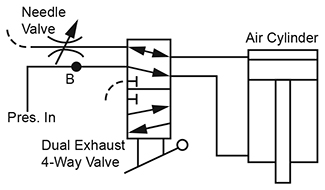 3. Increase cylinder speed in both directions by raising, if possible, the system pressure as set on the pressure regulator. Since the regulator itself has pressure loss, it may sometimes be best to remove it entirely. Caution! Do not raise pressure higher than rating of components in the circuit. Some valves will shift without being actuated when over-pressured, causing an accident.

Figure 3. Add quick exhaust valve in one or both cylinder
ports to reduce back pressure to increase speed.

4. Quick Exhaust Valves. Figure 3. These valves may be used on single-acting cylinders and on one or both ports of a double-acting cylinder. They increase cylinder speed by removing most of the back pressure on the exhausting air. As installed on Figure 3, the quick exhaust valve increases retraction speed without affecting forward speed. A similar valve could be installed at Point C to increase forward speed.

5. If practical, increase diameter of air supply line to machine. Install oversize hose connections between valve and cylinder, then bush down to fit cylinder and valve ports. Shorten lines connecting valve to cylinder. Remove any fittings which have passages smaller than the hose or pipe to which they connect.

6. Figure 4. If an air-operated machine is installed at the end of a long distribution line and the pressure is low because of restrictions in the long feeder line, or because other machines rob the air before it reaches the machine, an air storage tank can be installed near the pressure inlet of the 4-way valve. During periods when the machine is not running, air volume will accumulate in the tank and the pressure at the inlet of the valve will be higher, on the average.

7. As a last resort it may be necessary to replace either the 4-way valve or the cylinder, perhaps both. Increasing the valve size may give better results than larger cylinder bore if the air feeder line to the machine is long and restricted. But if the feeder line is large, giving ample flow, increasing the cylinder bore will probably be more effective than installing a larger valve.