How to Make Noise Calculations with Decibels

Womack Data Sheet 35: How to Make Noise Calculations with Decibels

Information in this issue supplements the basic information on noise levels in Design Data Sheet 24. The purpose here is to define more clearly how decibels are used to rate noise of hydraulic pumps, and to give examples of calculations.

Comparing Sound Power and Sound Pressure
Sound power is the acoustical power, sometimes expressed in watts, generated by a source of sound such as a hydraulic pump. Two sound sources (pumps) could be compared by their relative acoustical wattage outputs, but can be more conveniently compared by assigning decibel ratings on the dB power scale.

Sound pressure is the strength of the traveling soundwave, in PSI or other pressure units, at a specified distance from the source of the sound. Discomfort or damage to a listener's ears is from sound pressure, not from sound power at the source. Although two sound waves could be compared by their PSI as read on a sound level meter, it is more convenient to compare them on the dB pressure scale. This is a different scale than the dB power scale on which acoustical wattage is rated.

The dB scales for expressing and comparing sound power and sound pressure were arbitrarily selected so as to be convenient to use. The two scales are different but were carefully defined so their relationship to each other would be such that a change of (so many) dB on the power level at the source would result in the same dB change in pressure reading at any distance from the source. Instead of a linear scale, dB ratings were placed on a logarithmic scale to compress the upper end into a more usable and practical range.

What is a Decibel?
A dB has no assigned value; it does not represent a definite quantity of anything; it is simply a ratio used to compare the relative intensities of two sound waves, or the relative power levels of two sound sources. It can be, and is, used in other technologies such as electronics for comparing voltage, current, or power levels. Decibels could be used in illumination for comparing power level of two sources of light, or the illumination intensity at distances from the light source. They could be used in mechanical work for comparing two levels of force, torque, work, HP, etc.

Whether or not so stated, a dB rating is always a ratio either between two sounds, or between one sound and a fixed reference base. To state that a certain pump has an 80 dB noise level means that the ratio between its sound level and that of the selected zero base (0 dB) is 80 on the dB scale.

The dB Pressure Scale
The standard reference base selected for the intensity (pressure) of a sound wave is 0.000,000,003 PSI because this is the least sound wave intensity that can be detected by the average human ear. It is also the least difference between two sound waves that can normally be detected. This pressure has been assigned a value of 0 dB. It is more pressure has been assigned a value of 0 dB. It is more conveniently written in exponent form as 3 × 10-9 PSI. All other sounds are louder than this, the loudest being over 10,000,000 times the PSI intensity of the 0 dB base. Because this wide range of sound pressure is unhandy to work with, the dB scale, instead of being linear, was set up in logarithms to compress it into a more compact scale where not more than 3 digits are required to express pressure levels over the entire audible range. When comparing the sound pressure of two sound waves, their dB difference is, by definition, 20 times the logarithm (to the base 10) of their ratio. Examples are given later.

The dB Power Scale
Sound radiation power is also compared by dB ratings, and for this purpose the 0 dB reference base was arbitrarily chosen to be 0.000,000,000,001 watt, or written in exponent form: 1 × 10-12 watt. Since sound pressure decreases as the square of the distance to the source, the power scale was set up as the square root of the pressure scale, so that any change in dB power at the source would cause the same dB pressure change at any distance. So, the dB power scale was defined as 10 (instead of 20) times the logarithm (to the base 10) of the ratio between two acoustic power levels. (To take the square root of a number, its logarithm is divided by 2). 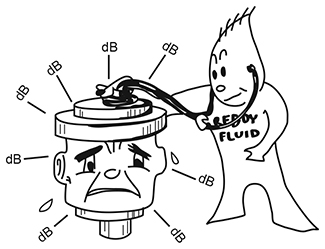 This issue shows how to make calculations relating to
noise level of one or several hydraulic pumps.

1. Comparing Two Pumps for Noise
We can compare the dB rating of one pump against another and select the one with less noise, but this does not really give us a "feel" for how noisy each one would be. Standardization methods are under development for specifying noise in "sones". If adopted by all manufacturers it would be easy to compare one pump with another because the assigned value in sones is the loudness as it appears to a listener. It is derived experimentally from data averaged from many listeners. Two sones sound twice as loud as one sone, three sones sound three times as loud as one, etc.

To find the actual acoustic power difference between two pumps, their manufacturer's dB ratings can be converted into watts by the method in Paragraph 8.

2. Calculation of Acoustical Power of a Pump
Acoustical power, either in dB or in watts, cannot be measured by any known method; it can only be calculated by taking a dB sound pressure reading with a sound level meter at a known distance from the center of the pump, then using the formula:

The factor -2.5 dB is an approximation to take care of moderate sound reflections from walls.

Example: Find the dB noise power of a pump from a meter reading of 87 dB pressure taken 9 feet from the pump.

The acoustical wattage of the pump can be calculated from Paragraph 8 after its dB power level is found.

3. Calculation of dB Pressure
If the dB rating of a pump is known, the sound pressure it will produce at any distance from its center can be calculated as follows:

4. Decrease of Sound Pressure with Distance
The general procedure is given near the bottom of the second column on the back side of Design Data Sheet 24.

Example: Find the decrease in dB pressure if the distance to the pump is increased to 3 times the original distance.

5. Increase in Noise Caused by a Second Source
If a hydraulic power unit having several pumps is proposed, what will be the combined noise level with all pumps running?

The dB rating of each pump must be obtained from its manufacturer. These dB ratings, being logarithmic, cannot be added directly. The easiest way to combine them is with the chart in the next column. After the total radiated power has been determined, then follow the method of Paragraph 3 to find the pressure level produced at a specified distance.

If a second pump or power unit is to be installed, either at the same or a different location than the existing power unit, its effect on the dB pressure level at a listening location where an operator is working can be determined by the method in Paragraph 6.

In combining several noise sources, combine the two highest first. Combine this total with the next highest level, etc.

6. Pump Added to a Noisy Background
To find the additional noise which will be contributed by a pump added to an already noisy background, first measure the existing noise level at the listening location. Then, using the manufacturer's dB rating for the pump to be added, calculate what its dB pressure level would be at the listening location if run by itself. Finally, combine the two noise level by using the chart above.

7. Finding the dB Power Level
Use this method to find the dB power level when the output power, in watts, is known. This conversion would be used more often in electronics than in acoustics.

8. Finding Wattage of a Certain dB Level
This, too, may be used more in electronics. If the dB power level above 0 dB is known, the wattage can be calculated:

9. Finding dB Gain
This is used in electronics to find the power gain of an amplifier. The input and output levels, in watts, must be known. Then proceed as follows: