How to Select a Pressure Switch for Your Application

Womack Data Sheet 20: How to Select a Pressure Switch for Your Application

Part of the information on diaphragm and bourdon tube pressure switches was adapted from information published by the Barksdale Division of Delaval.

Several types of pressure switches are available. The designer should choose a type which can be expected to give the most satisfactory results on his type of application.

If the service life (number of cycles the switch is expected to operate) is less than one million, a Bourdon tube or diaphragm type is indicated. If more than a million cycles, a piston type should be used. An exception to this rule is when the pressure change in a system is small (20% or less, of the adjustable range). Under such conditions a Bourdon tube or diaphragm switch can be used up to 2½ million cycles before metal fatigue or contact failure.

Speed of Cycling
In addition to service life, the speed of cycling must be considered. If a switch is expected to cycle more than once every 3 seconds, a piston switch should be specified. The metal of any bourdon tube or diaphragm switch acts as a spring which will heat and fatigue in extremely fast cycling operations, thus shortening the life of the switch.

Accuracy
Diaphragm and Bourdon tube pressure switches generally have greater accuracy than piston switches, and would be preferred where accuracy is important, provided they meet requirements for service life and speed of cycling.

Switches with Belleville spring (snap action) seem to provide the greatest repetitive accuracy, but the manufacturer should be contacted on life expectancy of the spring. 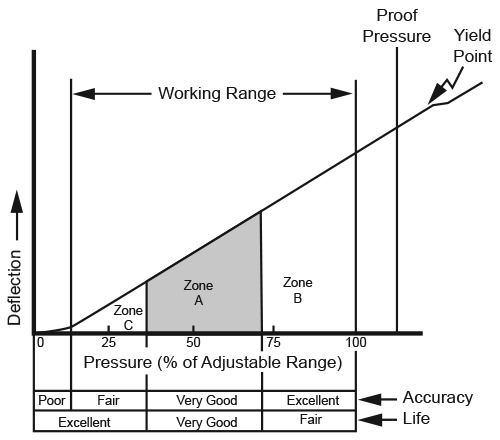 Figure 1. On switches with diaphragm and Bourdon tube movements, greatest accuracy is in the upper 65%,
best life factor in the lower 65%, and the best combination is usually in the middle 30% of its working range (Zone A).

Adjustable Range
The term "working range" defines the pressure range a switch may see under normal working conditions. This is normally the adjustable range.

Fluid Media
The fluid compatibility with materials of construction must be considered. Consult switch manufacturers catalog.

Proof Pressure
Proof pressure is the highest pressure that the switch will stand without permanent deformation, and usually defined as 1½ times maximum working range. Although a pressure gauge in a system may show a constant operating pressure, there may be surges which are dampened by the orifice in the gauge which would damage diaphragm and Bourdon tube elements in a pressure switch. For this reason, the working range should extend well above the actual operating point. 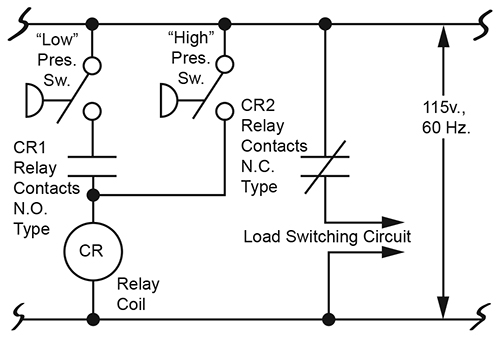 WIDE DIFFERENTIAL PRESSURE SENSING
Although some pressure switches have an adjustment for setting the differential (pressure difference needed to open and close the switch contacts), this differential may not be wide enough for some applications.

Figure 2 circuit can be adjusted for a virtually unlimited switching differential. It uses two standard pressure switches and one holding relay.

Design Data Sheet 19 showed a sequence circuit for a large double-acting work cylinder. The present circuit is a modification using a double acting clamp to replace the single-acting clamp of the previous circuit.

Sequencing follows the standard clamp and work pattern, with the clamp retaining full holding force until the work cylinder has completed its retraction.

Valve 4 is responsible for retaining full air pressure in the clamp until the end of the cycle. It is a 4-way, closed center, double piloted valve, 1/4" size. Only one pilot is used. The pilot on the left end is left in a vented condition, with an air breather to prevent ingestion of dirt into the end cap. Only the center and one side position are used.

Circuit action is as follows: The operator shifts and holds Valve 1 to start the cycle. Air flows to the clamp cylinder through check Valve 5 and Valve 4 (which is being held in its side position at this time). When the clamp bottoms out and pressure rises behind its piston, sequence Valve 2 opens, causing pilot air to shift Valve 3. The work cylinder makes its forward stroke. Also, the pilot of Valve 4 vents, allowing the spool of that valve to move to center position, locking air behind the clamp piston.

To retract the cylinders, the operator releases Valve 1. This vents the pilot of Valve 3 and allows that valve to return to normal position causing the work cylinder to retract. Pressure on the rod end of the work cylinder remains low until that cylinder has completely retracted. Pressure then builds up and shifts Valve 4 to its side position. Thls powers the double-acting clamp into its release mode.

As stated in Design Data Sheet 19, if an air sequence valve is not available, a low range hydraulic relief valve can be used if it can be adjusted to about 50 PSI, and if the air line is lubricated. Refer to that sheet for more details.