How to Solve Your Air Line Water Problem

Certain applications like those pictured below, and others, will not tolerate any water whatsoever condensed out of the air line. One of several methods may be used to eliminate the water problem. But to better understand the solutions proposed here, the reasons for the presence of water in the air line should be understood.

Terms Defined
All air, including both compressed air and free air, contains water in vapor form and sometimes in mist or fog form as well.

Water Vapor. This is water in gaseous form which is dissolved in the air and is completely invisible. There is no filter, no matter how intricate, which can filter water vapor out of an air line. Vapor can only be removed by a de-humidifying process.

Water Mist. This is actually liquid water in such finely divided particles that it will remain suspended indefinitely in air. It is visible if present in appreciable quantities. A good air line filter can remove up to 98% of the water mist. Water mist is harmful in a compressed air system, water vapor is not. As long as water vapor remains in vapor form it does no harm; in fact it carries a part of the fluid power flowing through the system. It is only when it condenses into mist that it becomes harmful.

The Problem
Free air drawn into the compressor intake contains a moderate level of water vapor. As the air is compressed, the vapor concentration or the relative humidity increases in the same ratio as the compression ratio, with the result that air delivered from the compressor is nearly always at saturation or 100% relative humidity. Excess water condenses during the compression process and the subsequent cooling process and collects in the bottom of the receiver tank where it can be regularly drained off. Air piped from the receiver tank through the air distribution system and through machines which operate from the air line is at saturation and will drop out water at any and every place in the system where its temperature or pressure drops, even slightly. Obviously, any condensation which appears in the line following a filter cannot be picked up by that filter.

The Solution
Since water vapor cannot be filtered out, the only solution to the water problem is to use some kind of de-humidifying process to remove enough of the vapor so any further drop in either pressure or temperature down the air line or in the machines which use the air will not cause water to drop out. It is neither necessary or desirable to remove all of the vapor because the vapor, if it remains a vapor, works just as effectively as compressed air in moving a cylinder. Removing more vapor than necessary wastes power.

Compressor Aftercooler
During compression the air may momentarily reach a very high temperature, up to 450°F. Of course it cools rapidly as it is passed into a receiver (storage) tank. During this cooling process it drops a great deal of water by condensation. This condensate can be drained off. The air in the receiver is now at saturation, and at any later time, if it cools further, additional water will drop out.

Water Consumption of Aftercoolers. The rule-of-thumb for water supply to an aftercooler is 1 GPM of water for every 25 HP of compressor capacity. This is based on 75°F inlet water, 120°F inlet air, 80°F outlet water, and 90°F outlet air. For conditions other than stated, more or less water may be required. The higher the air pressure the more efficient its operation and the less water required.

Best Compressor-Pressure. On relatively small air systems, raising the cut-out pressure on the compressor then dropping the pressure through a regulator may reduce the relative humidity so no air dryer is needed.

The relative humidity of saturated air when its pressure is reduced through the regulator, becomes less than 100% and it may be dry enough so no additional dryer is needed, especially if it is allowed time to warm up to room temperature after it has expanded through the regulator. It can be discharged into a large volume storage tank before use so it will have time to reach room temperature.

Air Dryers
The two most common ways of reducing water vapor content of compressed air, on a large scale, are to condense it out with a refrigeration system or to absorb it with some kind of a desiccant system of which there are several.

Refrigeration-Type Air Dryers. Inlet air is chilled to about 39°F to force it to drop part of its water vapor by condensation. At this temperature it is at saturation or 100% relative humidity. Before being discharged it is heated back up to room temperature and will be at some point below saturation. In subsequent usage, no more water will drop out unless the air is cooled to a temperature less than 39°F.

A conventional freon-type refrigeration system is employed. These dryers are manufactured with ratings from 1/6 to 10 HP. The 10 HP model has capacity to service up to 500 HP compressor capacity at normal shop air pressure.

Desiccant-Type Twin Tower Heatless Dryer. Two identical towers are filled with a desiccant similar to silica gel which will "adsorb" water without combining with it. The water is simply trapped and held. The desiccant can be purged by a flow of dry air at room temperature through it. After a timed interval which may be from 3 to 5 minutes, the towers are switched so the first one can be dried while the second one is in service. 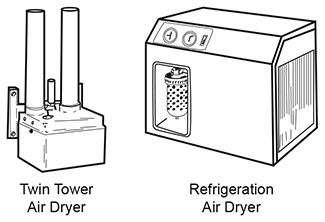 In the heatless version of the twin tower dryer water is removed from the desiccant during the regeneration cycle by passing a small flow of dry air, tapped from the dry air flow from the opposite tower, through it. Water is picked up and vented to atmosphere. The towers are switched by two 3-way or one 4-way solenoid valve controlled with an electric timer. During regeneration, every cubic foot of compressed dry air, when allowed to expand about 7 times (from 100 PSI) to atmospheric pressure, can carry out 7 times as much water vapor as was carried in.

These dryers require no maintenance or replenishment of desiccant. No water drain is required. They consume only about 50 watts of electricity. They can produce very dry air, down to -75°F depending on the desiccant used. They can be shut down at night and on week ends and will immediately produce dry air when turned on. About 15% of the entering compressed air is consumed for regeneration.

These dyers require no maintenance or replenishment of desiccant. No water drain is required. They consume only about 50 watts of electricity. They can produce very dry air, down to -75°F depending on the desiccant used. They can be shut down at night and on week ends and will immediately produce dry air when turned on. About 15% of the entering compressed air is consumed for regeneration.

Currently these dryers are available for air flows to 600 SCFM at 100 PSI. Larger models are no doubt available on special order.

Desiccant-Type Twin Tower Heated Dryer. These dryers are similar to the heatless type but use heat derived from electrical power to dry the desiccant. They deliver 100% of the inlet air to the output but require electrical power, the amount according to dryer size.

Chemical Desiccant Dryer. Many chemicals have a desiccant action; that is, the ability to chemically combine with water vapor, forming a solution. Incoming air is passed through a bed of chemical desiccant and the resulting solution of water and chemical is drained away. From time to time the desiccant bed must be serviced and additional desiccant added. Common desiccants are salt or urea.

This type dryer Is capable of giving excellent results but requires very frequent and careful maintenance. They are little used today, having been replaced by other types. We no longer recommend them because of their high cost of maintenance (manpower and desiccant), the corrosive effect of desiccant which could enter the air stream, their sensitivity to high air temperature, and their relative inefficiency.