The Nature of Sound
Airborne sound (including noise) is a variation in PSI air pressure in the audible range, and sound pressure can be measured by its force against the diaphragm of a microphone. Sound waves, unlike light waves, are longitudinal vibrations of air molecules moving back and forth in the direction of the traveling wave. Energy from a sound generator sets sound waves in motion, and they travel approximately 1,100 feet per second in air.

As sound waves radiate outward from their source, their intensity diminishes as the square of the distance traveled, starting with a first measuring point at least 2 or 3 times the largest dimension of the noise source. On small components such as pumps, this first measuring point is taken as 3 feet or 1 meter from the center of the pump.

The wide range of sound intensity and sound pressure in the audible range complicates the problem of rating noise strength. The human ear can hear, without damage and without discomfort, sound pressures 10,000 times greater than the weakest sound it can detect.

Because of this extremely wide range, noise measuring instruments are usually calibrated in decibels (dB) instead of in PSI. The dB scale is logarithmic, which compresses the upper end of the scale and allows ratings to be given in not more than 3 digits (120 dB, etc).

An important fact to remember about decibels is that they are merely ratios, and only become absolute values of power or pressure when referred to a fixed base. In acoustics, the sound pressure which is barely audible is 3 × 10 PSI, and this has been assigned a value of 0 dB. It takes a calculated value of 10.042 dB of acoustic power (from a pump, for example) to produce a pressure level of 0 dB at a distance of 3 feet from the pump. The reference, or base, level for acoustic power is taken as 1 × 10-12 watts.

A person can comfortably tolerate sound pressure levels up to 80 dB. Between 80 and 90 dB he might show some intolerance to the noise, but above 90 dB the average person can tolerate it only for short periods.

Definition of the Decibel
On the decibel scale used for expressing the total amount of acoustic power radiated from a noise source, the dB level is defined as 10 times the logarithm (to the base 10) of the ratio between the sound level and 0 dB (1 × 10-12 watts).

However, since sound pressure at any radius from the source is proportional to the square root of the sound power producing it, the decibel scale for expressing the sound pressure is defined as 20 times the logarithm of the ratio between the measured sound pressure and 0 dB, because to square a number its logarithm must be doubled. The accepted reference level for 0 dB on the pressure scale is 3 × 10-9 PSI. (0.0002 microbar). Figure 1. Doubling the sound power at its source
increases its level by 3 dB, and increases the sound
pressure level at all distances by the same 3 dB.

If acoustic power at the source is increased, the chart below gives examples of how to calculate the increase on the dB power scale. The first example shows that if the sound power is doubled, the radiated dB level increases by approximately 3 dB.

Increasing the sound power, for example by 5 dB, also increases the sound pressure by 5 dB at all distances.

"A" Weighted Sound Pressure Levels
Figure 2. Whether a sound is objectionably loud depends on its frequency as well as on its intensity. Higher frequency sounds are less tolerable and do more damage to the ear than do sounds of the same intensity at lower frequencies. 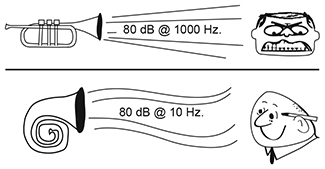 Figure 2. "Noise" intolerance depends on frequency
as well as on intensity of the sound source.

The permissible noise exposure levels stated in the Walsh-Healey Act are in the "A" weighted frequency response network, and marked "dBA".

Noise level meters have a selector switch for setting their sensitivity over the audible range either to the "A", "B", or "C" weighted response characteristics. When set on the "A" scale, filters in the electronic circuit of the meter give it about the same response as the human ear over the audible range, and meter readings are specified in "dBA''. This scale is always used when measuring sound pressure imposed on an operator because it totalizes the full range of frequencies which cause discomfort and ear damage. The "B" and "C" weighted scales on the meter also have filters which give the frequency response curves shown on the graph. They are used mainly for scientific measurements when tracing the source of noise. 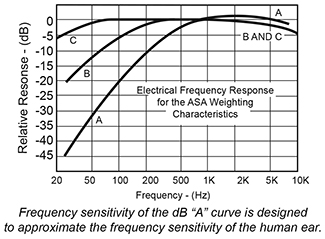 Noise Level at the Operator's Position
Figure 3. The objective, of course, in making noise measurements is to be sure the sound pressure level on the operator's ears does not exceed an acceptable level. A hydraulic pump rated at 120 dB may or may not be too noisy, depending on its distance from the operator.

The chart under Figure 3 gives examples of how to calculate decrease in dB pressure level as the sound source is moved further from the operator, based on a reference position located 3 feet from the source. The first example shows that if the separation distance is doubled (as referred back to the 3-foot reference point), the sound pressure level is reduced by approximately 6 dB from its original level, etc. 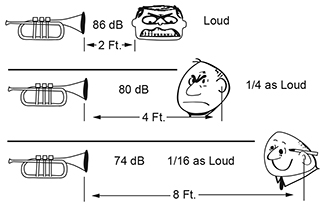 Figure 3. Sound pressure on the listener's ears
decreases as the square of the distance from the source.

If the dB power rating of a pump is known, the dB pressure level at any distance can be calculated with this formula: dB (pressure) = dB (power) - 20 log distance in feet - 0.5 dB.

Acoustics Measurements Summary
Sound is measured with an instrument which includes a microphone, an electronic amplifier with filters, and a voltmeter having a scale graduated logarithmically and marked in decibels (dB). However, a sound meter cannot measure the acoustic power being radiated from a sound source. Instruments can only measure the air pressure produced at varying distances from the source by the energy of the sound waves. From pressure measurements, the acoustic power at the source can be determined mathematically.

If it were possible to have 5 identical pumps set up so they were always equidistant from a sound meter, and if the meter reading with one pump running was 70 dB at a distance of 3 feet from the meter, these meter readings might be expected at other distances and other running conditions:

In a later issue we will summarize points on the original system design to obtain a quieter hydraulic system.