Speed regulation must not be confused with speed control of a hydraulic motor. Speed regulation refers to the undesirable slow down of the motor when it picks up a load. It is an indicator of how well the motor will perform under changing loads and how wide an adjustable speed range can be covered satisfactorily.

Speed regulation is expressed as the percentage of speed loss between no-load and full-load operation, and is different at each no-load speed, being best at maximum speed and becoming progressively worse as the no-load ·speed is reduced. Finally, it becomes so poor at low speeds that the motor can no longer operate satisfactorily.

A speed regulation of 0% would mean there is no loss of speed whatsoever as load increased from zero to full. All motors, in practice, suffer a speed loss under load increases, and the purpose of good design is to hold this loss of speed to an acceptable minimum.

A speed regulation of 100% would mean that the motor would stall as the load was increased.

How Important is Good Speed Regulation?
This depends on how important it may be on the particular application to prevent motor speed from dropping below an acceptable minimum as load is applied.

If the motor is running a load which remains constant at a given speed, the speed regulation is of little importance. It is on applications where the load may abruptly change, causing an abrupt speed change, that good speed regulation may be one of the more important design considerations.

How Does Speed Regulation Affect Speed Range?
If motor operation will be at a fixed speed, then speed regulation will be less important than if an adjustable range of speed must be covered, although it still may be important.

Speed regulation becomes of utmost importance on applications where a wide range of adjustable speed must be covered and where the load may change abruptly, particularly at lower speeds. Not only must the hydraulic motor be carefully selected for these applications, but the method of speed control and type of speed control valve are critical.

Evaluation of the Application
To decide how important speed regulation may be on a given application, these questions should be considered: 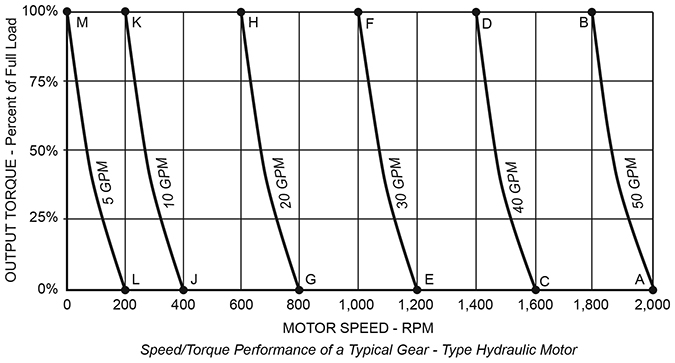 lllustration of Motor Speed Regulation
The above graph shows the performance of a hypothetical gear-type hydraulic motor over a speed range of 0 to 2,000 RPM, and over a load range of 0 to 100% of its rated torque (or horsepower).

Percentage torque loading is plotted along the left side of the graph, speed along the bottom. Motor RPM is in direct proportion to GPM. Lines curving upward to the left show motor performance at several GPM flows in various tests. The leftward curvature shows a loss of speed as torque load increases. This is due to internal slippage. Notice that curvature of all GPM lines is about the same. This indicates that internal slippage, in GPM, remains about the same at all speeds but increases with load increase and is a higher percentage at lower no-load speeds.

To interpret the graph, start at Point A. When a flow of 50 GPM is supplied to the motor, it will run at a no-load speed of 2,000 RPM. As load is increased to 100% (full load), operation is at Point B. With pick-up of full load, motor speed has dropped from 2,000 to 1,800 RPM because of internal loss of working oil through clearance leakage.

According to the definition of speed regulation given on the opposite side of this sheet, regulation would be:

PLOT OF SPEED REGULATION FOR GRAPH ABOVE

Note from the chart that the actual amount of speed loss, 200 RPM, is approximately constant at all speeds. A loss of 200 RPM does not affect motor performance much while it is running at 2,000 RPM, but has a tremendous effect on performance when the motor is operating at speeds less than 800 RPM.

Speed Range of a Hydraulic Motor
To show how speed regulation becomes progressively worse at the lower end of the speed range, the regulation has been calculated for each of the GPM/Speed lines, and is shown in the far right column of the chart below.

If performance charts like the above are available for the motor under consideration for a certain application, its drop in speed under various load increases can be estimated, and the range of adjustable speed over which its performance will be acceptable, can also be determined.

As a rule, a motor should be evaluated at the maximum load change which can occur at minimum speed.

Example: Assume that on a certain application, and using the motor graphed above, that a speed loss of 200 RPM is all that can be tolerated from zero to full load when operating at a reduced speed of 800 RPM. What is the maximum adjustable speed range over which this motor can be operated with acceptable performance?

Although motor performance is of prime importance for obtaining good speed regulation, the type of speed control circuit and the type of flow control valve used are very important also. In the next issue we will give recommendations for improving speed regulation when as wide a range of adjustable speed as possible must be covered.