Troubleshooting for Recurrent Solenoid Burn Out

This sheet describes an easy-to-assemble test device to help diagnose the cause of repeated burn out of a solenoid coil on a double solenoid air or hydraulic valve.

One possible cause for recurrent burn out is the energizing of both solenoids at the same time. Even a short overlap of a small fraction of a second, if repeated cycle after cycle, may eventually build up enough heat to break down the coil insulation or burn out the winding.

This overlap of energization could be a fault in the electrical circuit design, or it could be improper operation of an electrical component - such as sticking or delayed break of relay contacts.

This type of burn out can only occur on double solenoid valves of the direct-acting type - including the direct-acting piggy-back operators on top of large pilot-operated bodies where the two solenoids are mechanically yoked to opposite ends of the same spool, and would "fight" each other if both were energized at the same time. One of them would be able to seat and would be subject only to holding current. The other would be held open, causing it to draw inrush current, usually about 4 to 5 times normal holding current, and it would soon burn out.

There are other possible causes for recurrent solenoid coil burn out, and these will be discussed in a later issue. 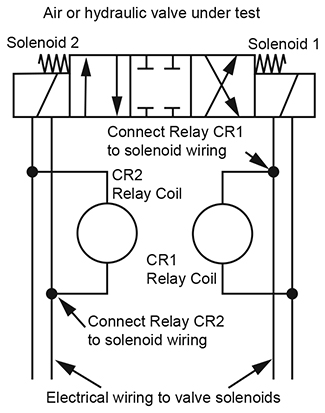 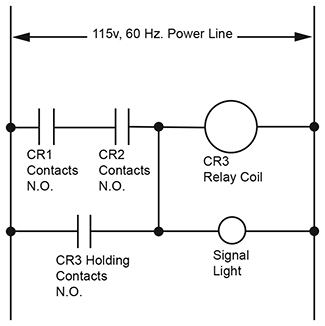 Figure 2. Next, wire Relay CR1 and CR2 contacts in series with coil of CR3, so CR3
contacts will close only if there should be current on both valve solenoids at the same time.

How the Test Device Operates
The test device described here is very simple, consisting of three relays and a pilot lamp. Each relay has one set of normally open (N.O.) contacts. Two relays have their coil wired to one of the valve solenoids, as in the left diagram. They pull in when the valve coil to which they are wired is energized. The third relay is connected to a signal lamp which gives the alarm if at any time, even momentarily, both valve coils become energized at the same time. Voltage rating of the first two relays must be the same as the solenoid coils to which they are connected.

Each time one of the valve solenoids is energized, the relay wired to it will close its contacts. However, Relay CR3 coil will only be energized if both sets of contacts on Relays CR1 and CR2 close at the same time, since they are wired in series. If Relay CR3 should become energized, its contacts will electrically lock it closed where it cannot open even though the valve coils become de-energized. The signal lamp also lights through contacts of CR3. Once it lights, it will remain lighted indefinitely until the operator unplugs the test device, allowing Relay CR3 to release.

Try this device next time you have a case of mysterious recurrent burn out for which you cannot find the reason.

In some fluid power circuits there could be a tendency for a 4-way valve spool to shift accidentally even though the valve remains unactuated. We call this "self-shift". This undesirable action could be a safety hazard or it could interfere with normal functioning of the machine on which the valve is installed.

Cause of Self-Shift
Several factors may contribute to this type-of malfunction machine vibration, gravity weight of a valve spool operating in a vertical direction. But probably the primary cause is a pressure unbalance developed within the valve body by excessive flow across the spool grooves. It may happen infrequently, once an hour, once a day, or once a month, with normal operation for long periods in between malfunctions. Self-shift can be minimized or eliminated by good circuit design. 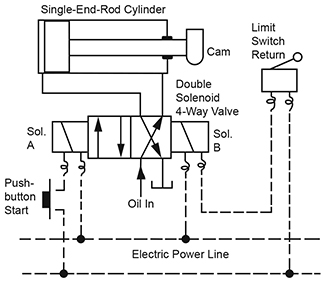 Figure 3. Simple reciprocation circuit which may be subject to self-shift if not properly designed.

Circuits Susceptible to Self-Shift
Figure 3. Self-shift is most likely to occur in hydraulic circuits which use a double solenoid, 2-position, no-spring valve in which the solenoid is momentarily energized to shift the valve spool and thus to reverse the travel direction of the cylinder such as in this simple reciprocating circuit. 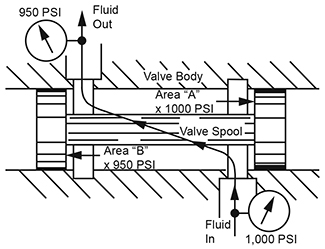 Figure 4. Balanced spool areas A and B are exposed to unequal pressures while fluid is flowing.

Pressure Unbalance Causes Self-Shift
Figure 4. In this exaggerated cross-section of a spool valve, internal fluid pressure is working against equal and opposite areas, "A" and "B", on the sides of the spool groove. As long as fluid is not flowing, both areas are exposed to equal pressure, and the spool remains in perfect pressure balance. But when fluid starts flowing across the spool groove there will be a pressure drop created by the flow. If there should be, for example, a 50 PSI drop created by the flow, then when 1,000 PSI is present at the inlet port and working on spool Area "A", there will be 950 PSI at the outlet port and working on spool Area "B". This difference of 50 PSI multiplied by the groove sectional area may cause the spool to drift toward the right unless it is firmly held against drift by fluid, mechanical, or solenoid force.

With the spool and body construction used in most 4-way valves, the pressure unbalance through one flow path (pres. to cylinder) will be opposed by an unbalance in the opposite direction caused by the other flow path (cylinder to tank). When using a double-end-rod cylinder with equal areas on opposite sides of the piston, the self-shift forces would seem to be cancelled. However, most cylinders have unbalanced areas, so the flow through the two paths would be different, causing a net unbalance of forces acting on the spool.

Design Precautions for Avoiding Self-Shift
Especially during the design stage, give these factors careful attention: