Pressure Compensated Flow Control Valves. These are adjustable speed control valves for hydraulic cylinders and motors. In addition to the adjustable metering orifice, there is a "compensating" spool which can modulate the flow during operation to keep it constant at the value set on the metering orifice by an operator. The adjustable orifice and the compensating spool work together, and are built into a common body.

An orifice, by itself, cannot hold the flow constant if the load on the cylinder or motor should change. Therefore, a pressure compensated flow control valve is called for on applications where constant speed must be maintained even when the load changes.

Obviously these valves are not suitable for compressed air, and work most efficiently on hydraulics at the higher pressures. Below 2000 PSI, their efficiency becomes increasingly poor.

In this issue we intend to show how a speed control system can be designed by using any kind of adjustable metering orifice, and adding a separate compensating spool valve to work with it for unusual effects. 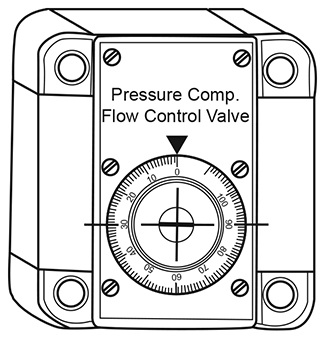 Figure 2. Meter-Out Speed Control. The three components shown - orifice, check, and 2-way spool valve are all contained within the housing of the flow control valve shown in Figure 1. However, individual components may be selected and plumbed separately to achieve the same results. This approach may be used to advantage when working with a special kind of adjustable orifice which for one reason or another is not available with built-in pressure compensation as a completely self-contained flow control valve. Compensation can be added to any kind of needle, gate, globe, ball, or diaphragm valve. We will show there are other advantages to using individual components in place of a self-contained pressure compensated flow control valve.

The compensator spool is a 2-way, pilot-operated, normally open spool valve with spring return. If such a valve is hard to come by, one can be made by modifying a pilot-operated pressure reducing valve as shown on the backside of this sheet. 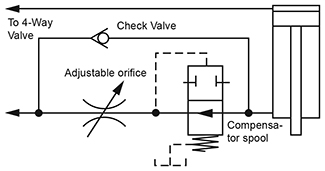 Figure 3. By-Pass Meter-Out Speed Control.This type of action can only be achieved by assembling individual components into a speed control system. There is no self-contained pressure compensated flow control on the market which will give this action.

Figure 3 has the advantage of meter-out control for maximum cylinder stability, plus the advantage of bleed-off action in the oil supply to the blind end of the cylinder. The excess oil which is forced to by-pass to tank can by-pass at load pressure instead of relief valve pressure, thus saving power and reducing heat generation during periods when the cylinder is idling or working lightly loaded.

The compensator spool in this figure is a 2-way, pilot-operated, normally closed spool valve. A standard by-pass valve will serve the purpose if it is a direct-acting rather than a pilot-operated type.

The by-pass, meter-out circuit of Figure 3 is the best speed control for cylinder or motor, with best stability and minimum oil heating, but cannot be used in systems with more than one branch circuit operating from a pump.

As background for this circuit, remember that hydraulic motor performance is best when operating at maximum speed, and becomes progressively poorer as speed is reduced. Gear and vane-type motors sometimes will not cover more than a 3 to 1 or 4 to 1 range with good performance. The reason for this is the internal slippage which causes the speed regulation to become progressively worse at lower speeds. 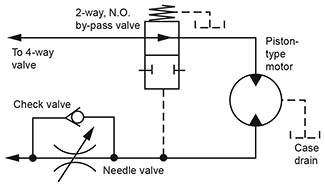 Widest Range of Variable Speed. To be able to operate a hydraulic motor over a wide speed range - 10 to 1 or more - it is necessary to place the adjustable orifice in the motor outlet. It is also necessary to use a piston-type motor because this type has a case drain which will carry out the internal slippage without letting it pass through the adjustable orifice to worsen the speed regulation.

The compensator is a standard 2-way, pilot-operated spring returned, spool-type valve, normally open, or, a pilot-operated pressure reducing valve can be modified for this service as shown below.

Figure 4 is series metering in the motor inlet. Alternatively, a 2-way normally closed valve could be used to bypass excessive oil at the motor inlet. This would be a circuit comparable to Figure 3. It would give the same excellent performance and would minimize heating of the oil.

Figure 5. If a suitable 2-way, normally open spool valve is not available for the circuits of Figures 2 and 4, a pilot-operated pressure reducing valve may be modified for this service as shown in the notes on the drawing.

If this valve is used in the motor inlet as in Figure 4, an external pilot connection must be brought out and the internal passage plugged. But if the valve is used in the motor outlet as in Figure 2, the spool is piloted from its own outlet and the external pilot port is not needed. In either case, however, the pilot poppet and spring must be removed and the drain connection must be run directly to tank. 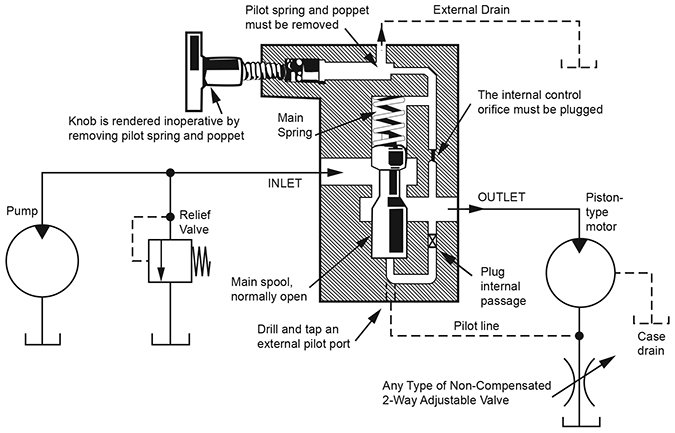 Figure 5. Modification of a pressure reducing valve to make a normally open 2-way valve for use in Figures 2 and 4.